E   First off I must say that this is the fulfillment of a dream. From the beginning I was not only interested in building cars but in building cars suitable for minifigs and in finding ways to combine them with a town surrounding. Now what could be nicer than to have even moving vehicles within a town? So many thanks to my dear friend Altezza whose invention of a slot road made this possible. Many thanks to Nils O for many useful advices, and last not least to Na Dine who provided quite a few parts. END_OF_DOCUMENT_TOKEN_TO_BE_REPLACED

Hi all,  here you can see my modded GE, turned into a car museum. It’s based on an earlier MOD some of you might already know, see www.flickr.com/photos/er0l/8056214219/ . I’ve used a second set to enlarge it and built a sign. There’s not much of an interior yet, but at least it may be used as a shelter for the cars. Anyway I am not too fond of interiors you can’t see from the outside – here you can see enough to believe it’s a car museum. It has an open back so that there’s enough light within the building.

But the main aspect here is rather the SNOT system used to build streets and pavements completely out of bricks. I’ve developed this together with my dear friend Altezza (Michael). Actually we don’t know if it has been done like this before – of course there are SNOT streets and pavements, but maybe not exactly combined like this. If it’s already existing, hopefully we may use it. END_OF_DOCUMENT_TOKEN_TO_BE_REPLACED 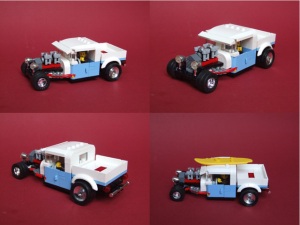 This is the Rod belonging to the Garage project, see here. It’s called Baby Blue. The colour design is inspired by L@go’s brilliant 4w car of the same name, see www.flickr.com/photos/legolago/6986117213. The driver is Jake Raines (hard to recognize because of the hairstyle), known from “Pharao’s Quest”. In fact the rod is derived from the Vintage Truck (see www.flickr.com/photos/er0l/8118521795), but turned out to something quite different. END_OF_DOCUMENT_TOKEN_TO_BE_REPLACED 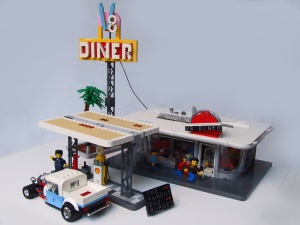 This is the first step of a bigger project which is meant to feature the cars. This part consists of a 50s style Diner with a sign and a small gas station (rather part of it). And there is a new Rod, too, which is called Baby Blue.

There are some traces of different stuff in it which I tried to melt into something new. It’s not meant as a design study, but as a functional thing – something being used by minifigs. That means that if there is a barstool they must be able to sit on it – even if more beautiful barstools can be imagined. The diner has a detachable roof and a detachable back. The main points here are the slanted columns and the large windows.