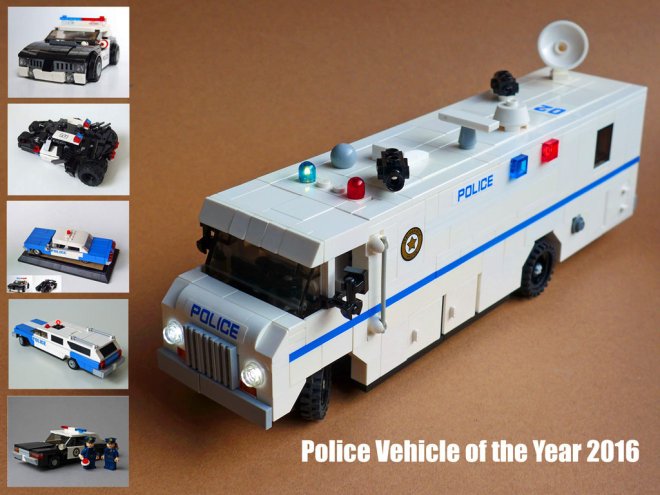 There still had to be the police vehicle of this year. Now that there are moving vehicles again it had to be one of those, of course. But there was not enough time to build a completely new moving vehicle, that’s why I took the chassis of the school bus and built a new body for it. Modular building comes in handy at times …

The model hasn’t been tested on the slot circle yet (most of it being stowed away right now) but having the exact measurements of the bus it probably won’t fail there.

It’s not the first moving vehicle with lights I’ve built – the 2014 Police Interceptor, originally built for the first slot system, was able to move, too. The new vehicle is motorized, of course, since there is no chain to pull the vehicles any more. However, both vehicles share the combination between PF LEDs as headlights and backlights and the good old Light &Sound lights as police lights. Difficult to say for how long such a rather battery consuming vehicle is able to move – this has to be tested, too.

In general omitting an active steering (which not only requires a servo motor but also an IR receiver plus a larger PF battery box) gives the opportunity to add other functions, especially in such large vehicles. However it would be interesting to see if something like this would work with an RC vehicle, too.

The vision is to get all elements necessary to build enlightened layouts – strictly with Lego parts, of course. Buildings are no problem, there are some working street lights already, also an enlightened Monorail and Loco and even a yacht. What is still missing are illuminated signs though. And hopefully there will be some more vehicles with lights (which don’t have to move in each case).

That’s about it, I guess. Thanks for looking, thanks a lot for all the support during the last year, merry Xmas and all the best for 2017!